Emmy- and Tony Award-winning actress and singer Kristin Chenoweth's career spans film, television, voiceover, and stage. She received an Emmy Award for Best Supporting Actress in a Comedy Series for her role in Pushing Daisies, won a Tony Award for You're a Good Man, Charlie Brown, and received a Tony Award nomination for her original role of Glinda the Good Witch in the Broadway smash-hit Wicked. Chenoweth has released multiple albums, including The Art of Elegance and For the Girls, and has performed to sold-out audiences across the world. Kristin stars in the Apple TV+ musical comedy series Schmigadoon! She also starred in the Netflix comedy feature Holidate, voiced the character Daisy in the HBO MAX film The Witches, and hosted the Food Network series Candy Land. Kristin remains a passionate supporter of charities, including the Broken Arrow Performing Arts Center Foundation in her home state of Oklahoma, where she launched an annual Broadway Bootcamp providing young Broadway hopefuls with the opportunity to learn from mentors in the field. 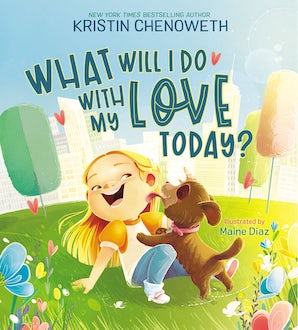 What Will I Do with My Love Today?